Have a difficult time finding a place to disposal your battery? Or electronic waste? you look into your local bin and find no solution.

You can look no further

Because cu-ewaste is here to save the day!

So we were asked by Aj. Kulthida Teachavorasinskun. She is a lecturer at Chulalongkorn University, Industrial Design Department to develop a recycle robot that could use as a recycle bin and also draw attention from people who pass by, in order to engage and make them talk about it

In order to make people engage, we decided to insert wheels and voice of its own and call that V1. 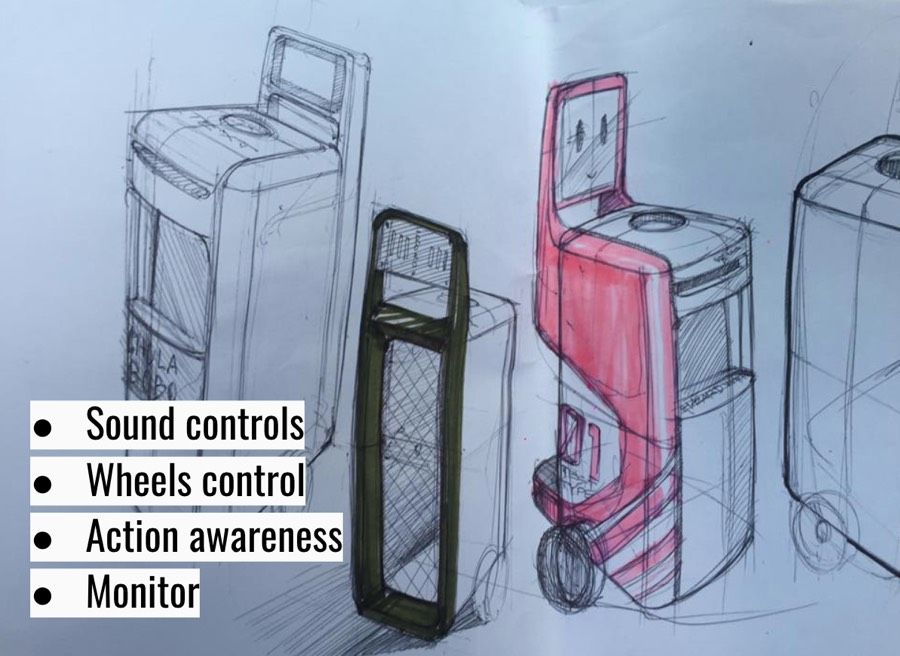 We use old broken water cooling tank that was giving by Chulalongkorn university. With prototype budget, we can't make a new model, we use one we already have (Reuse! Recycle!) , although, it was not the efficient size but this robot is make to engage people, not to actually received load of electronic waste

This robot run on Arduino and Raspberry Pi. For Arduino, There is an RF module connect to the Arduino waiting for Data from RF racing car remote control, 433 Mhz, Then the arduino drive 2 motor modules to drive the water cooling tank. For Raspberry Pi, drive sound system, there is USB wireless numpad connected to Raspberry Pi. When staff press number on the numpad the robot talk, there are 10 voices. Each of them are magnificent! but let not get into them. ( ** added, also there is also LED strip, one color) 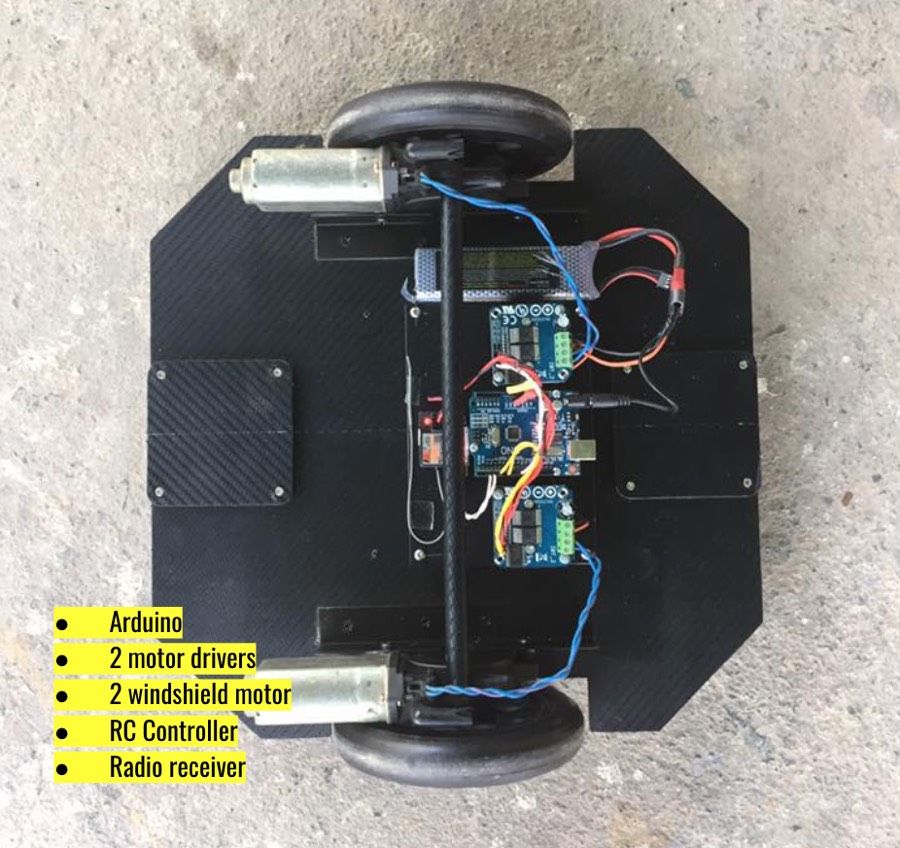 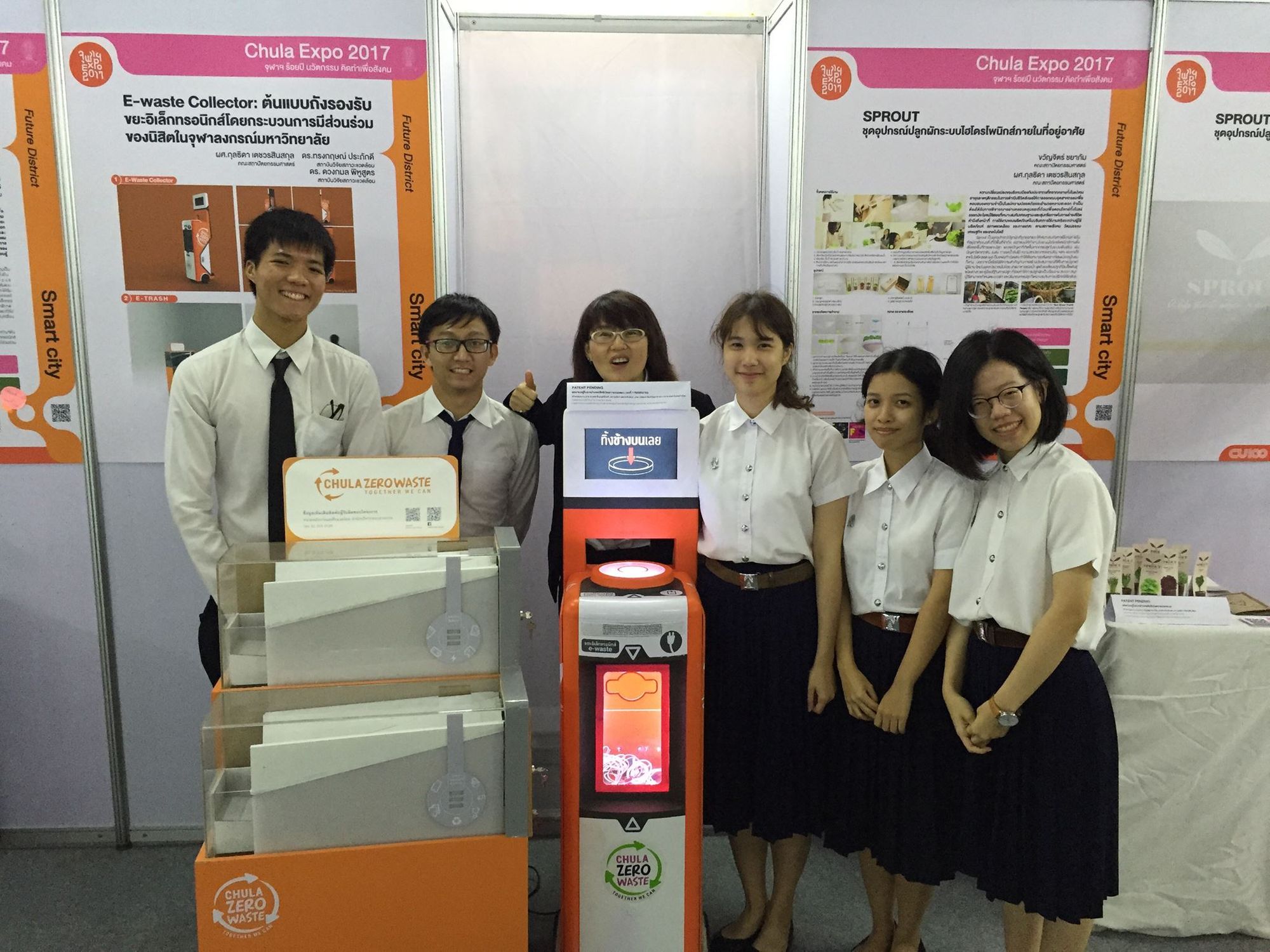 Everyone is happy, V1 is cute.

This is the result, sorry I did not record full video of it moving

After v1 prototype, Aj. Kulthida asked us to actually do a real e-waste recycle bin, I believe there are 23 pieces around Chulalongkorn university. We did integrated notification system to staffs on LINE and a website to check if the bin is full, weight, and times it was used. We also add LED RGB system, and LED panel. 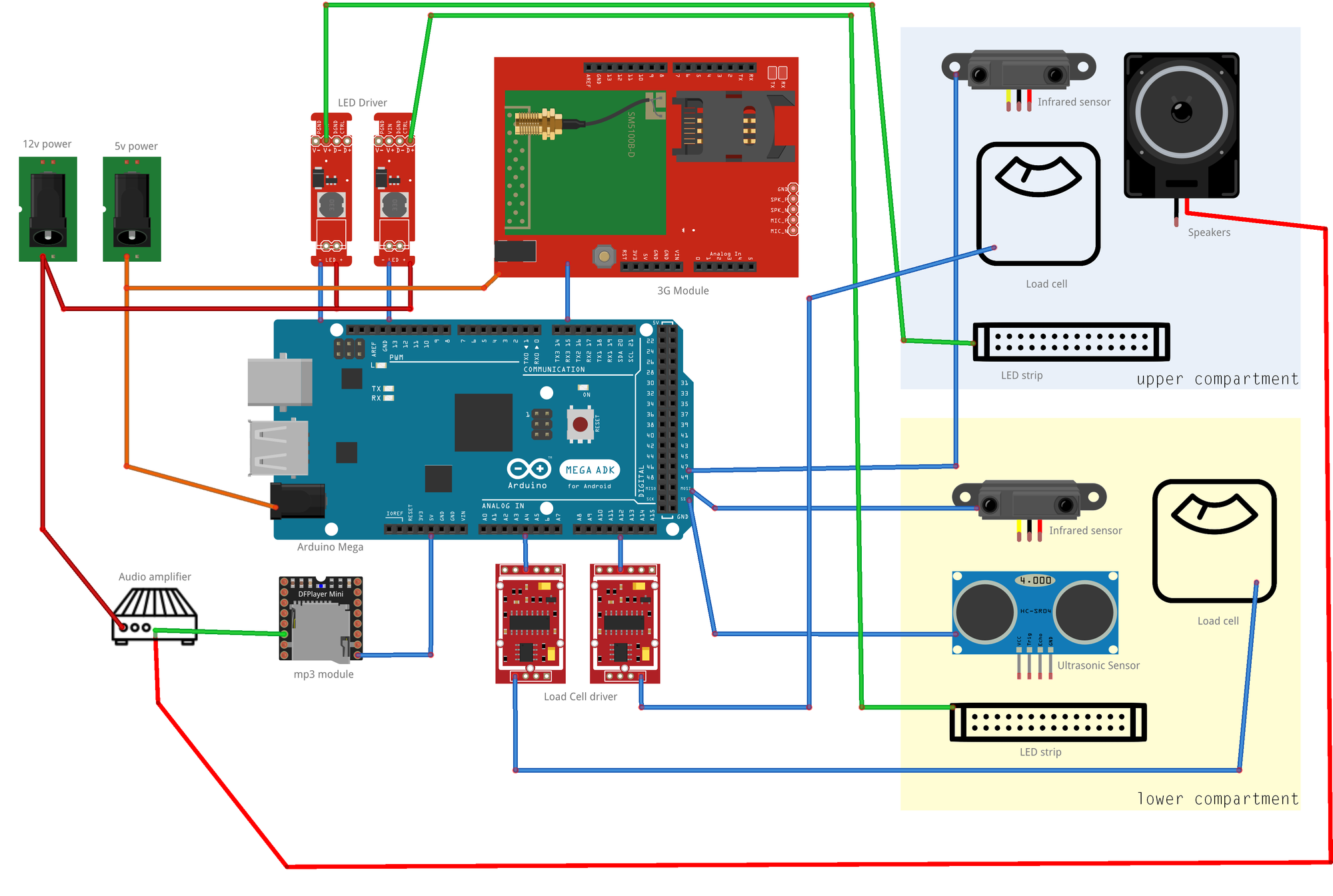 (Above) Simple system flow to get everyone on the same page. We use 3g module to sent notification to LINE if weight >= 15 kg and do a push to our web API every 10 sec and reset all counting variables, as the same time, if user throw e-waste it will count, number of times, and sent signal to mp3 module to play "THANKSS YOUU" voice and sent LED RGB light flashing. For LED panel, it's a separate module that show news and random images. 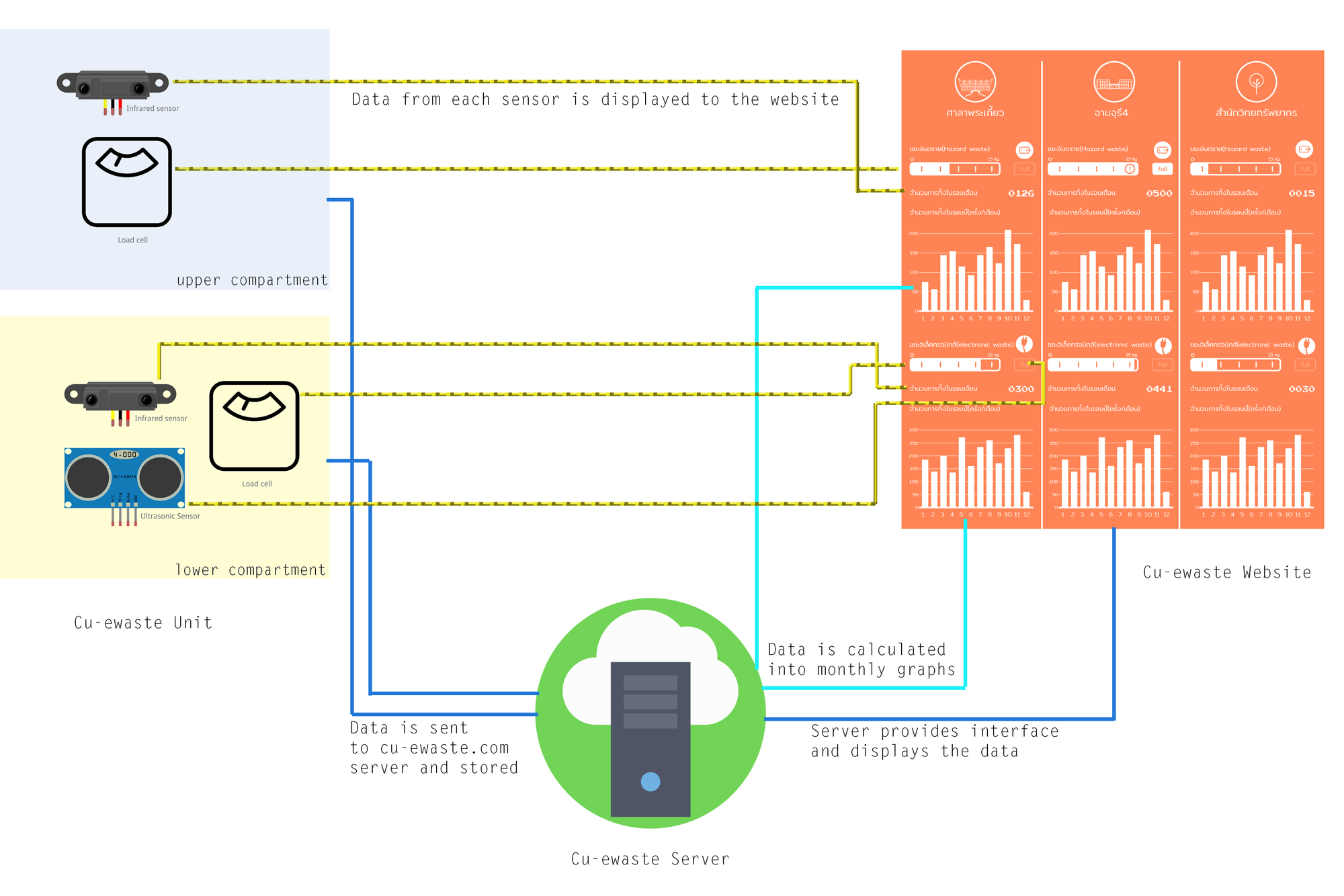 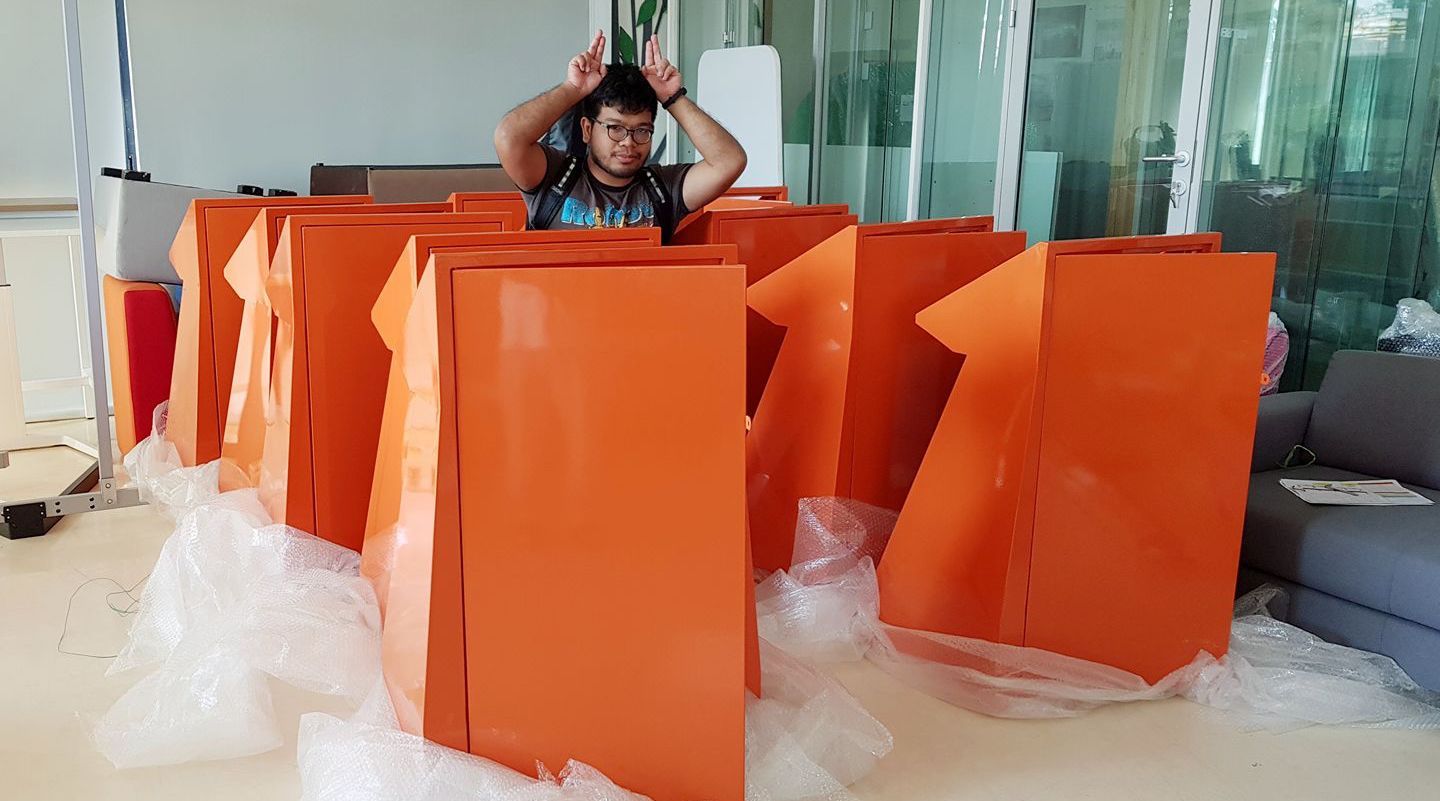 This is the quick snap of the Web interface 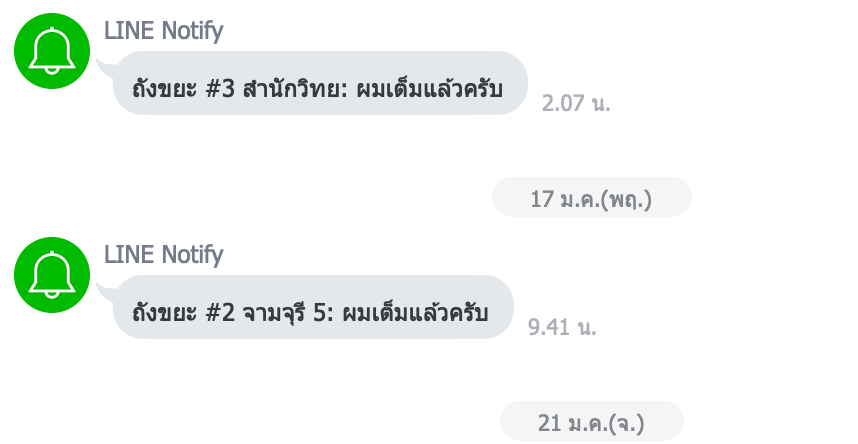 With LINE notification, we can ping staffs in the group, remind them to pick up the trash for specific locations.

Problems along the way

We are naturally forced to use 3g. Wifi is not an option because we have 23 pcs, there is no way that we can connect to wifi of each faculty for 24/7. 2g was an option, it's cheaper and we don't need to sent that much information, but then we found that in Thailand, there are only 1 provider at the time... that we could have 2g but this 2g services will soon eventually be terminated, so it's not the answer for long-term maintenance, we were thinking of NB-IOT and LORA but at the time of making, this two are not widely used, no documentation. Thus, 3g is the only option, we paid a lot for 3g monthly. 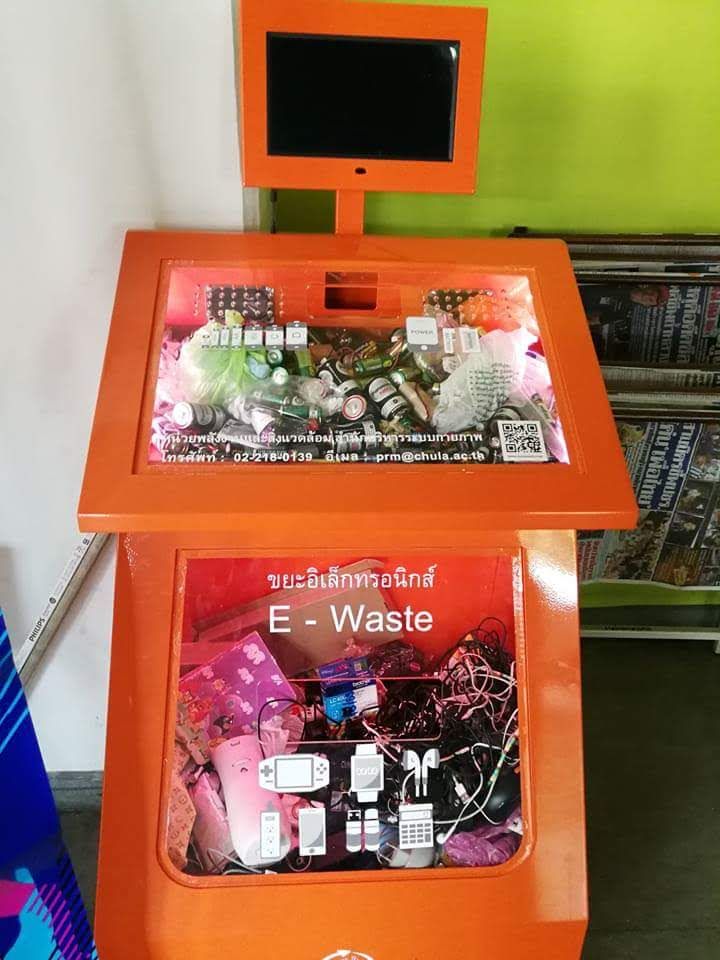 As I mentioned, there are 2 compartments 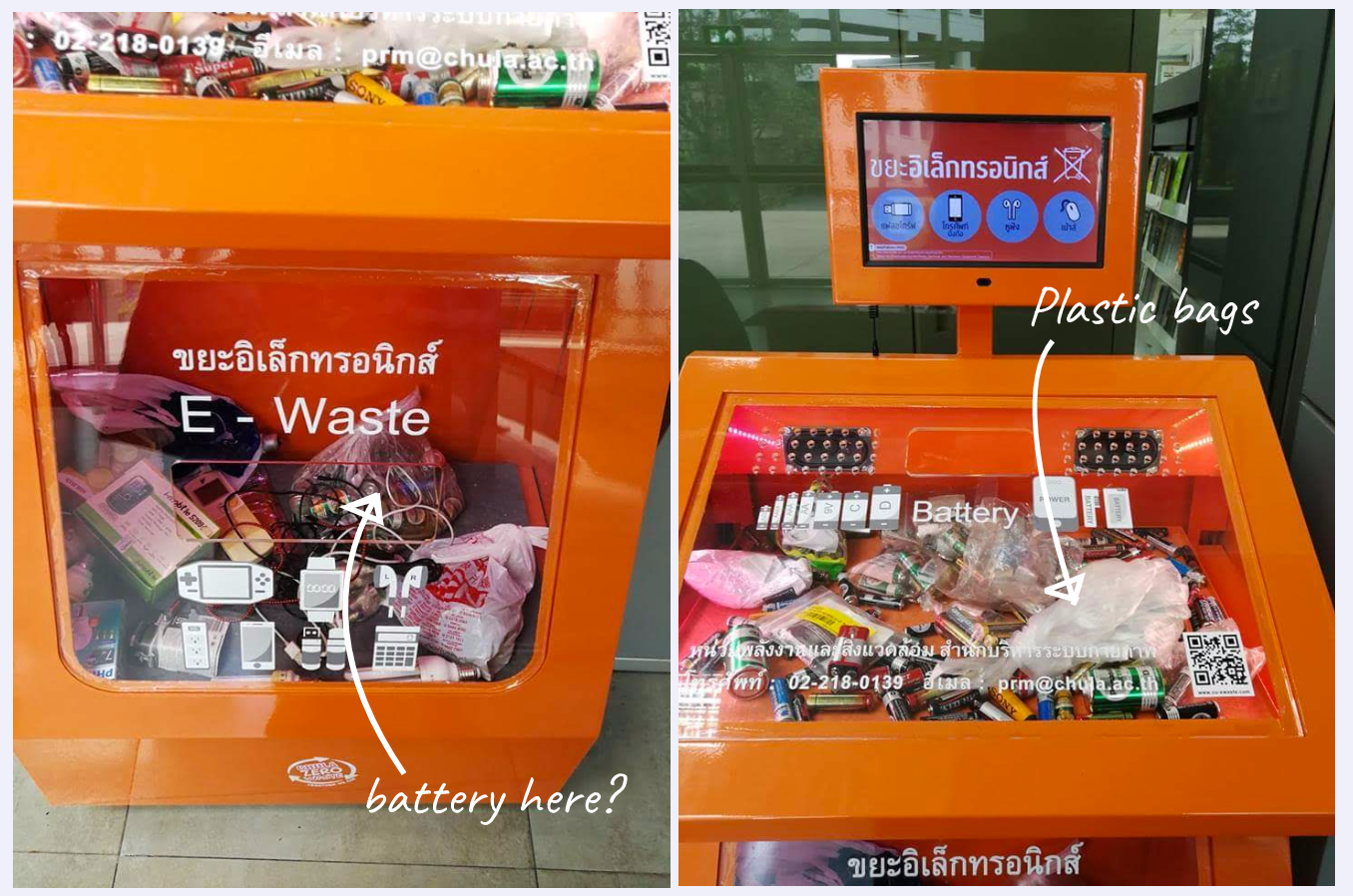 Users misuse slots, there are bigger battery eg. 12 volt battery for motorbike that could not fit upper compartment, so people put it in lower compartment. Meh!

but I don't think it's user fault.

Users misuse slots, user come here with huge plastic bag of battery, they don't use upper compartment, because it's in a huge bag! none have time to put each in the upper slot.

This is user fault, but we can prevent it.

Problem is containers that come along e-waste eg. plastic bag, if plastic bag is big and if it get in a way of ultrasonic, or infairad sensor, this mean both sensor will trigger all the time (I first wrote program that way, so first month, amount of time that the one particular bin recieved trash is 24,000 times ( and the robot does not stop speaking! ), it is usually 1,500-2,500 times monthly) so I change the program to stop counting if it is exceeding amount of continuity, but then again we wouldn't have exact amount if the sensors are covered by something.

This is my fault.

I was only there for system parts, all graphic layout, shape and form of the robot kiosk are carefully designed by students of Industrial Design Department, Chulalongkorn university under advice from faculty members. so, all the credit should go to them :D

Professional present unwrapper and co-founder of H-lab and AUTOSAVE std, the Winner of world’s best person award, self-made thousandaire, and internet cats addict. and you know I made that up